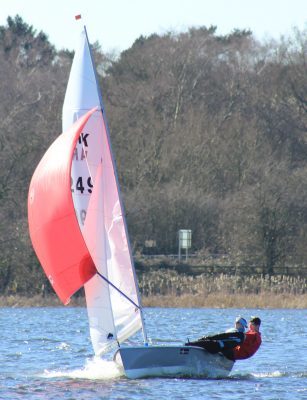 Larks are light, fast racing boats with mainsail, jib and spinnaker. The Lark is one of the fastest symmetrical hiking dinghies and extremely responsive, but can be sailed equally well by males and females of all ages.

The design has had two major upgrades since it was first developed by Mike Jackson in 1966. The class was introduced to the club in 1972.

The latest 'Mk. III' Rondar Lark introduced in 2001, is very stiff and virtually dry when righted after a capsize. Spinnaker handling is made easy as the boats have an opening in the foredeck called a 'spinnaker chute' from which the spinnaker is launched and subsequently recovered. Construction is low-maintenance FRP/GRP although a few older boats have wooden decks.

South Staffs is one of the oldest Lark clubs and the boat still retains fleet status after over 30 years.

Many of the current top national crews have been brought up and trained by the experienced sailors at South Staffs the club had 3 crews in the top 7 at the 2002 nationals at Looe!!